To understand how people might approach the usage of a ‘permanently’ accessible trans-situational crisis mapping tool, the proposal needs to identify what a member of the public might be able to share prior to an event unfolding. This should provide an experience in some way that takes into account the affordances enabled by a smartphone. For example: location, time and resultant relevance.

If the data being collected across a geographic location during a crisis will be similar to other ‘crisis maps’ that have been deployed before, how might Prepare Wellington look to encourage people to use the map during times where life remains ‘business as usual’?

As a concept, the ‘sharing economy’ – making resources available via web-based services – has been around for at least 15 years. Alongside ‘mutualisation’ (of assets) the core value: “Access trumping ownership” (“The rise of the sharing economy,” 2013), is usually presented through the lens of accessing latent utility in a neighbourhood that may be available for borrowing or hiring (streetbank.com, for instance). But the specific need of the object being borrowed is seldom part of the equation.

In most peer-to-peer sharing scenarios, the lender makes an item available knowing its intended use, and seeking for it to be used as much as possible (especially in a monetised relationship like AirBnB). If we turn this equation on its head and tie the utility and availability of an item to the occurrence of a situation that affects everyone in a community, might there be a way to ask people to privately record their ownership of something so that its potential is revealed and unlocked at a later date, for the relief of that community? With Prepare Wellington a ‘lender’ would lists an item as a potential community asset with no predetermined timeframe of use, and no specific use scenario in place – an inversion of the normal ‘sharing economy’ model. 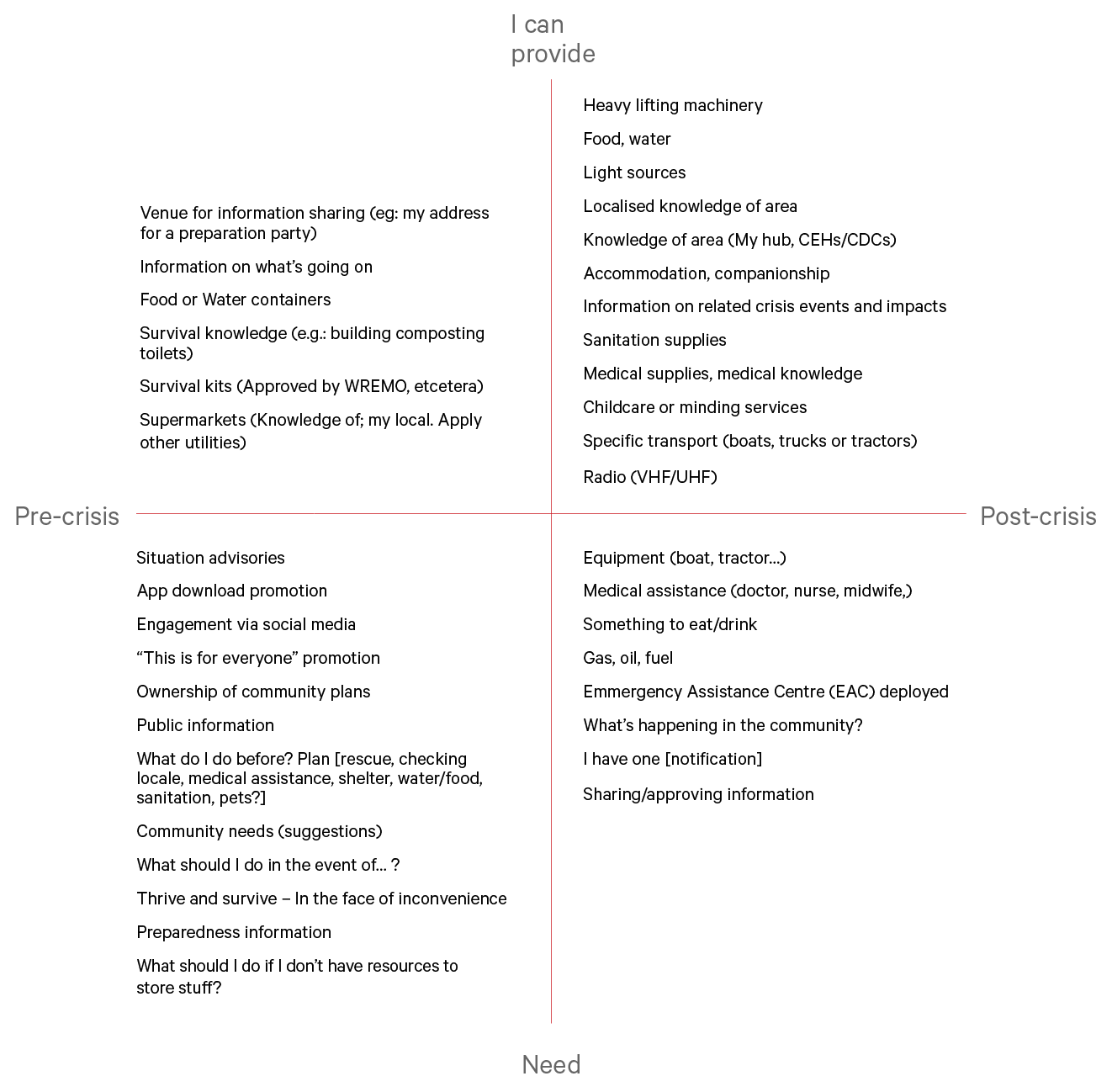 Within the design of an experience framework, a user journey is a linear flow that identifies one specific task to be completed by a probable user. Usually these tasks are matched to user profiles analogous to actual people.

However, in this preliminary phase of establishing and designing these tasks for Prepare Wellington, user profiles will be established at later date. The following user journeys were designed to prioritise the communication of the concept so that it could be further discussed and user tested.

6.3.1 Structure of experience within the five crisis phases

As noted in §4.6 Crisis phase model, WREMO uses an established framework that identifies the different phases of the pre- and post-crisis environment. Prepare Wellington proposes that these loosely identifiable phases also act as the framework for the experience.

Even in an amorphous ‘timeline’ of event categories, the broad identification of phases allows different functions to be aligned against, and applied within, the proposed experience. This way each purpose of each function can be proposed for any particular citizen at the relative phase of the event. This is especially important for separating the functions which might be available between one form of situation awareness or engagement and another. 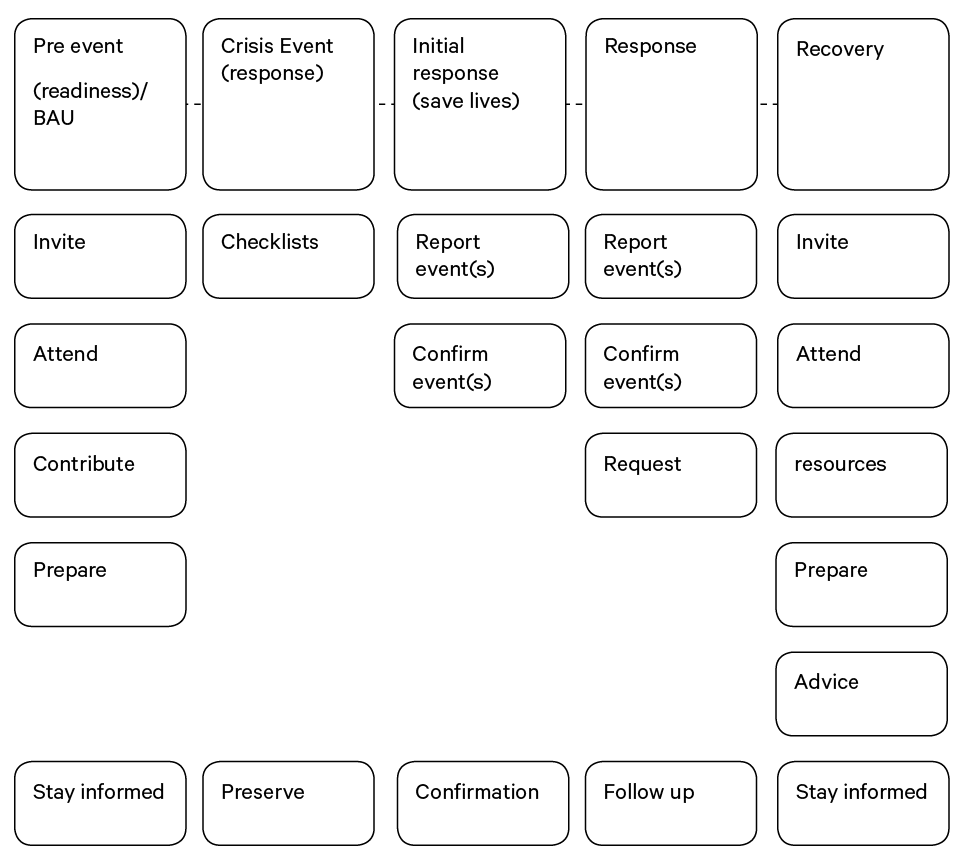 In lieu of a registration process, onboarding (information given at first use) helps a user initiate Prepare Wellington. In the first stages of design, development and deployment, it is not anticipated that the experience requires a user account. However, the conventional inline permission notifications may be required.

The following tasks are aligned with “Business as Usual”, the first period in the five crisis phases.
The first user journey asks the user to add an asset to the ‘community bank’ of items that might be accessed in the case of a crisis.

The second user journey asks the user to create an event and invite people for the purpose of making connections in the neighbourhood.

The following tasks are aligned with the ‘Initial response’ or ‘Response’. These are the third and fourth periods in the five crisis phases.

The first post-crisis user journey asks the user to report and describe a situation that may be otherwise unreported.

The second user journey asks the user to review and confirm a situation that is ongoing. 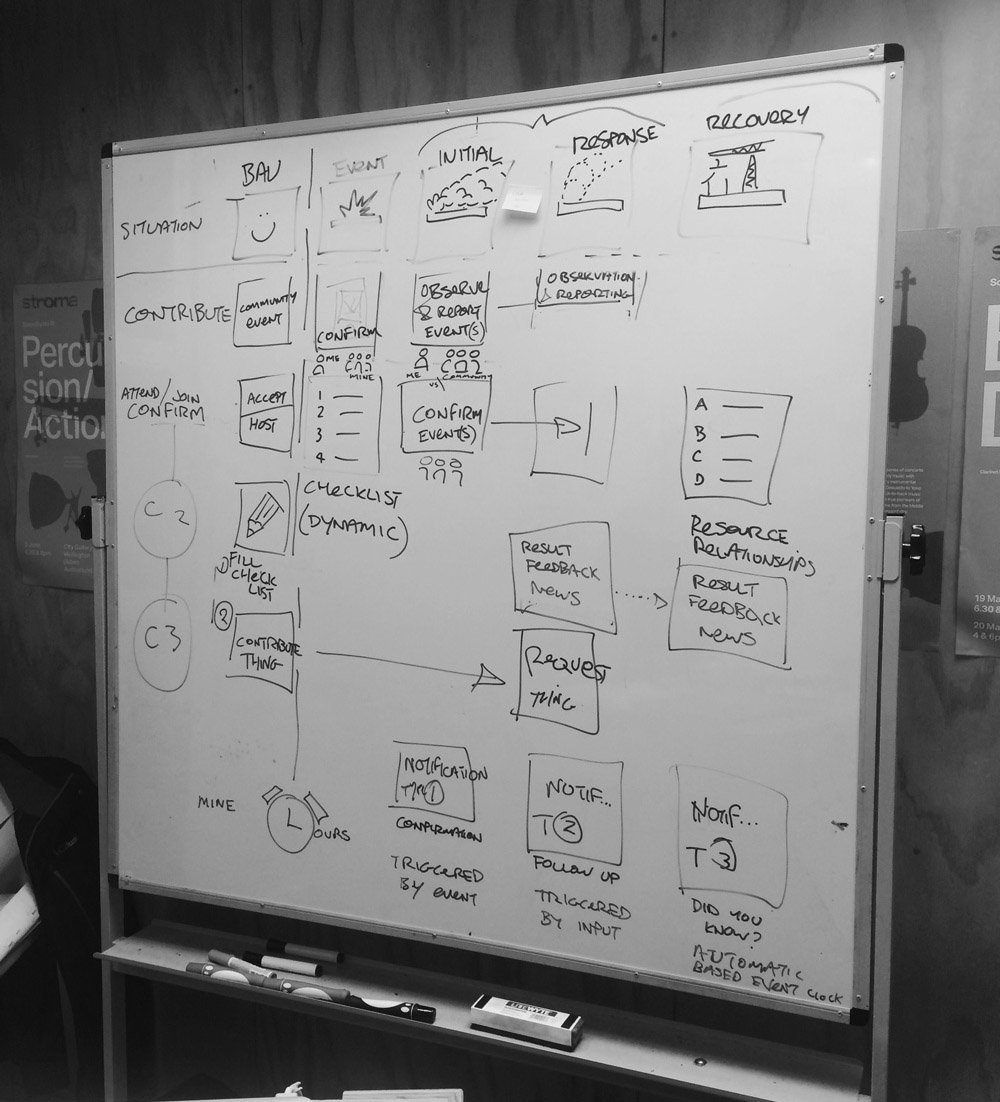